Nitish Kumar and the Politics of Bihar 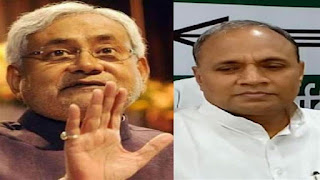 This is a clear hint for the BJP, by Nitish Kumar when he decided not to send RCP Singh to the Upper house. RCP Singh is in the Modi cabinet from the JDU. However, the decision of the Nitish Kumar not to be a part of the Central ministry certainly gave thousands of talking points to the political analyst.

What will be the impact on the current JDU-BJP government led by Nitish? Is something new political formation on the way to come? On the other hand, this is just for RCP Singh to understand, that only one can be boss in one party, and in the JDU Nitish is the Supreme leader. There is much news circulating in the media about the uncomfortable relationship between Nitish and RCP. Some time ago, RCP had a free hand to run the government or party. However, for some time RCP is no more Nitish's favorite for deciding crucial strategies.

At the many stances, RCP did not play any role in Nitish's or JDU agendas in Delhi durbar. During the collective demand by JDU and opposition RJD for a caste census. When CM of Bihar Nitish Kumar and opposition leaders Tejaswi Yadav came to Delhi to meet Prime Minister Modi, for the demand of caste census in Bihar. RCP was not seen anywhere in these demand. This was unusual, RCP is technically the only representative of JDU in the Modi cabinet; he would have played an active role in these kinds of demands.

Last year August 2021, Nitish Kumar CM of Bihar, opposition leader Tejaswi Yadav was also one of the key members of the delegation, headed development in the politics when 11 members of 10 political parties from Bihar went to meet the Prime Minister of India Narendra Modi, the delegation. This group from Bihar meets PM to conduct a caste census in India, to understand the exact population and economic status, so there may be social development programs or policies for this social group.

In the last assembly election, Nitish Kumar fought the election under the alliance with BJP, but JDU did not secure respectable seats. JDU contested with 115 segments of the assembly, but they were only able to secure win 43 assembly seats. His alliance parterres BJP contested 110 seats and was able to grab 74 seats. Even though, BJP had a bigger share in the alliance but offered the Chief Ministerial berth for Nitish Kumar as they had announced in the pre-election agreement. There were rumors in the Patna, right after the counting; that Nitish Kumar was reluctant to be CM minister with fewer seats in the assembly. However, BJP calculated rightly or they do not have a choice except go with under the leadership of Nitish Kumar as the CM of the state to form the government in the state. BJP tried to cripple the Nitish's aura by appointing two deputy chief ministers and the key berths in the ministry. Even they selected their speaker in the assembly to run the house. There was a harsh reaction in the assembly against their speaker by Chief Minister Nitish Kumar in the house itself. Nitish said, in the house to the speaker in the March 2022 “This is not the way the House runs,”

There is no coordination between the ruling parties in the Bihar. There were many instances, when one see, how the main ruling partner BJP and JDU denigrated each other's openly in the media. Even you see in the parliament, BJP leader and minter in the Modi cabinet Ram Kripal Yadav criticized the Nitish government for not completing the projects.

There are many speculations in Bihar politics. What is going to be the next move of Nitish Kumar? He had a bad track record of changing his loyalties overnights for keeping himself relevant in the politics of Bihar. His closeness with the leader of the opposition Tejaswi Yadav was in the discussion. When Nitish went to attend an iftar party organized by the RJD. There is the closeness between both arch-rival parties, but Nitish Kumar taking a strategic move with RJD for caste census to go for the new mandate in the come months or something else will come in the Bihar politics.

Nitish Kumar is at the forefront of the politics of Bihar despite he had lost in the last assembly election, through the RCP Singh episode he tried to send a message to the BJP, “I am the leader of the party”. This is interesting, RJD has been eying the Nitish Kumar move to come on his side, but what will be the modalities for such a move for the Nitish Kumar and his party to go with RJD? Who will be the CM face in such circumstances? What will be the future of the Mahagathband? Which are important alliances, even working beyond the election in the Bihar policies for rights and justice of the marginalized community. In this, fold CPIML working as an important alliance partner for the RJD for getting closeness with the social movement on the ground.

Nothing is impossible in politics, but the people of Bihar have been at a big loss for quite some time. The policies and programs of the state are not implemented properly due to a lack of coordination between the alliance partners. Nitish will go again to the old house. Where he can continue his politic of social justice and politics for brotherhood/ sisterhood, at a time of increasing communal hatred against the minorities in the country.