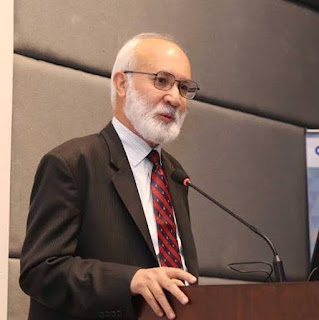 Rahimullah Yusufzai, who died on Thursday, 9th September evening, Rahimullah Sb was one of most authentic voices on Afghanistan, he was not keeping well for some time. He was finest journalists, who spent his entire life to understand and narrate the story of Afghanistan. He had also special command on the issues of various ethnic groups and their complexity of Pakistan.

Rahimullah Yusufzai was born on 10th September 1954 in Shamozai village of Mardan district Khyber Pakhtunkhwa, often abbreviated as KP or KPK and formerly known as the North-West Frontier Province, is one of the four provinces of Pakistan. He received his early education at his village primary school, then studies in public schools in Peshawar and Jhelum. For higher education, young Rahimullah got admission at the D J Sindh Science College, one of the oldest institutions in the region. Then he went to the University of Karachi for further studies. During his studies in Karachi, Rahimullah has also had to work to sustain his own expense and to contribute toward the family responsibility, since he was elder to his siblings.

After finishing his studies, Rahimullah worked as a researcher for few years, later joined an English Daily as bureau chief in Peshawar, with his hard work and relentless dedication for journalism, he earned his credentials for his authentic expression to understand the political or social issues.  He had command with three languages Pashto, Urdu and English for writing and speaking. Which was significant for him to communicate his work to diverse audiences, be it within a local, regional, or internationally.

Since the inception of The News, he worked with this organization throughout his life, first as bureau chief in Peshawar and later he was elevated as Resident Editor.

We in our village used to listen to BBC radio, in both services Hindi as well as Urdu, which was only a source of news & analysis of the current affairs. I used to listen to the sharp analysis of Rahimullah Yusufzai’s with his soft voice. My late grandfather was always looked for his analysis to understand the situation in Afghanistan during the American invasion or during other political crises in the region.

I had a great experience for me to interact with him in Delhi, while I was doing my PG Diploma at the Nelson Mandala center for peace and conflict resolution at Jamia Millia Islamia, our then Director, Prof. Radha Kumar has helped us to attend various high-level conferees and seminar to understand the conflicts, which are happening in worldwide and specifically in the South Asia Region, I still remember, there was a seminar of South Asian regional editors to discuss media responses to conflict at the India International Center in 28th to 29th March 2006. That was inaugurated by the foremen Chief Justice of India J. S Verma, he had told one important remark during his inaugural speech " All conflicts arise in the minds of men and that is where they need to be tackled. The impact the media makes in influencing the mind is so great and it can make all the difference. " Rahimullah Yusufzai was also here at this important seminar as an expert to share his inputs, then he was Peshawar bureau chief of The News International, and of course his expertise on reporting about and from conflict zone was important to listen for people like us to learn. During his session, he shares many important anecdotes from his life as the report from the conflict zone, He had shared "The media should focus more on the humanitarian issues of conflict. This has been a problem in the past due to the lack of access to conflict areas for journalists and their obsession with the political aspects of conflicts. "

During the lunch break of the session, I went to interact with Rahimullah sab. I introduced myself as one of his listeners on the BBC radio. He was so humble, soft-spoken person and a great listener. I shared about his reports on the BBC, and how I used to listen to those reports along with my family. He was fond of building a relationship among both countries India and Pakistan. More exchanges between people to people, I still remembered, we also had a long discussion on the significance of South Asian Association for Regional Cooperation (SAARC) in future to build a better economy and social relation between the region. But, I don't have hope shortly, this is a distinct dream in the contemporary political situation of the region.

He will remain an example of unwavering commitment to journalism and for his reporting from the conflict zone. Ys, his analysis will be missed, now more than ever before because of the current development in Afghanistan. I am sure, he must have trained young journalists to follow the same kind of acumen, depth, and kindness with the profession.