Demand for OBC's Census with PM: What will be futuer of Bihar politices? 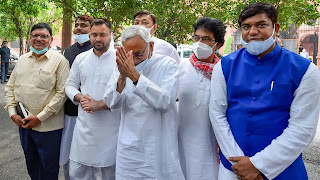 This is interesting development in the politics, when 11 members of 10 political parties from Bihar went to meet Prime Minister of India Narendra Modi, the delegation was headed by the Nitish Kumar CM of Bihar, opposition leader Tejaswi Yadav was also one of the key member of delegation. This group from Bihar, meet PM to conduct caste census in India, to understand the exact population and economic status, so there may be social development programs or policies for this social group. After the meeting with PM, Nitish Kumar shared in media briefing, that Mr. Prime Minister heard our request for the caste census, one of the most important statement Nitish Kumar recognized the effort of the opposition leaders, mainly Tejaswi Yadav, this is itself interesting to observe for political observers.

For last few elections, BJP is able to garner the support of OBC community in chunk as vote, like in last general election in 2019, BJP received around 44% of OBC vote as compare to 2014, when BJP’s share in the OBC vote was only 34%. If one looks the vote pattern of OBC in Bihar, 26% population the community trusted BJP’s agenda in the 2019 LokSabha election, in the contrary of this in the recent Assembly election 26% of OBC chose to go with RJD, when only 19% of OBC still voted to BJP in the assembly election in Bihar 2020.

Despite of huge support to BJP from the OBC, This ruling BJP is reluctant to come forward or openly for the benefits of the community, even though BJP’s PR and advertisements are trying to show this party and Modi as their mashie and every things are happening after 2014, as Modi himself claimed in the 2014 election as OBC candidate for PM of India, I still remembers, many of my friends, even though, they have nothing to do with the BJP and RSS’s Policies but during my conversation on those days, always tried to convince my “ Let us give chance to Modi for becoming PM” I was clearly able to understand, from where these arguments were coming those days. This is others, points many of them were disappointed with the Modi’s performance for helping OBC’s for education and jobs.

The ruling party in the center not interested for caste census, this is difficult position for the BJP when the CM of their own alliance partner putting pressure along with key operation party for the census. Union Minister of State for Home Affairs Nityanand Rai said in response to a question in Lok Sabha: “The Government of India has decided as a matter of policy not to enumerate caste-wise population other than SCs and STs in Census.”

Before Bihar, few states governments like Maharashtra and Odisha have requested to collect caste details in the forthcoming census. But, the government of India has decided not go for caste census.

It looks like BJP government in Delhi did not like to go aggressively for the causes of the OBC community, even though, after strong demand from Maharashtra and government of India amended the constitution in the winter session of parliament. The 127th Constitution Amendment Act, 2021, restores the power of states to identify socially and educationally backward classes (SEBCs), usually called OBCs. This bill was necessitated by the Supreme Court’s interpretations of “some provisions in the 102nd Constitutional Amendment Act”, which had inserted Article 338B and Article 342A (with two clauses) after Article 342. Article 338B deals with the structure, duties and powers of the National Commission for Backward Classes. Article 342A says that the president of India, in consultation with the governor, would specify the SEBCs.

Why don’t Delhi able to understand? The complete caste census will be only way to understand the backwarness of community. The time will tell, what is the strategy of the Nitish? As Chief Minister of Bihar, Nitish Kumar had already announced that, if center will not include the caste in enumeration of census, then stat government will conduct their own caste census in Bihar.

Is this just political gesture by Nitish Kumar? For seeking attention from BJP. Or there are something more coming in the politics of Bihar in coming month. You never know, Nitish is infamous for changing his camp overnight. There is unrest in his own Party JDU for these kind of move, which is causing embarrassment to the BJP, many political leaders from JDU is not comfortable with his move.  The tussle was not resolve last time between JDU and BJP. At the time of last expansion of cabinets, when JDU leadership did not satisfied with the offer of ministerial berth. There were reports in the media, the minister from JDU RCP Singh was in hurry to get own berth in the cabinet. So, Nitish Kumar taken National President post from RCP in July only. There were also reports in the media, RCP is too close to BJP.

It's matter of time, how long Nitish government will continue with the support of BJP? This government is running with thin majority, any time, if These two alliance partners Jitan Ram Manjhi and Mukesh Sahani will have better deal, they will shift their loyalty. But, BJP will put their everything to continue their government in Bihar till the UP election. Or Nitish will go again in the old house, where he can continue his politic of social justice and politics for brotherhood/ sisterhood, at time of increasing communal hatred against the minorities particularly with Muslims.