My tribute to Mahatma Gandhi in the amidst of Farmers protest 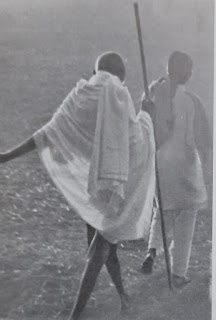 My humble tribute to Mahatma Gandhi on his death anniversary, he was assassinated by Nathuram Godse on 30th January 1948. Today world has grappled with COVID19. The Inequalities and unequal society is more visible than ever, even government of our time failed to protect citizen jobs, dignity and health. The uncertain or unplanned  lock down

didn't care for poor, marginalized community. Thousands of people were just unable to manage their food and other things which were necessary, like milk for children, medicine

for old/ sick people, women were not able to get Sanitary Pad/Napkins because those people had finished their savings in the first few weeks and there were no financial support from anywhere

Why I am saying all those things?  when I am remembering Gandhi because, how can I give tribute to this man without remembering the last person of ladder? Things become more difficult, when people begin discriminated based on their religion, when COVID19 cases were increasing, this old method in the so called civilized word, to put the onus on the weaker or marginalized section. I know, Gandhi ji started his first movement in April 1917 from Champaran in support of farmers, where farmers asked to cultivate Indigo on their land, this were being made mandatory to follow every farmers. Why I am mentioning here farming issues? In the 2020 our farmers are dealing with same kind of problems in the modern / Independent India.

Farmers are on the roads, Our own Indian state and media failed to understand the farmers and farmer movement, where farmers are agitating since September 2020, first they tried to discredit farmers movement, then build narrative that is happening only in Punjab, then they said only few farmers from Haryana is with this protest, but actually this is all India movement against the farm laws, people from Rajasthan, UP, Karnataka, Maharashtra, Kerala ,Tamil Nadu, Telangana, Bihar and others parts of India are equally contributing in this movement. For Last two months’ farmers are staying on the outskirt of Delhi's borders, actually they wanted to come in to Delhi but authorities didn't allow them to enter in to Delhi, more than one hundred farmers died, but no one is taking responsibility to resolve the situation or even providing safe space to register their protests, which is the Constitutional right of Citizens, why don't farmers go to Jantar Mantar or Ram Lila Midan for their protest?

In Democracy, government is for the people, why can't our media tried to understand, government means, to work for people or tried to give solutions of their problems. Contrary to this, governments in many parts of world not paying attention to the people voice or more seriously there are trends of majoritarian government, where far-right political party policies to isolate the minorities and play the sentiments of majoritarian sentiments.