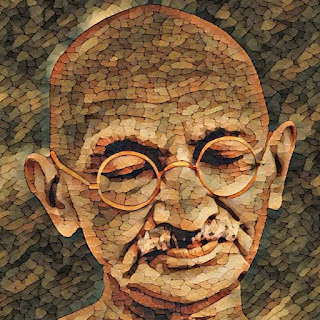 We are celebrating 150th birth anniversary of Mohandas Karamchand Gandhi, popularly known as “Mahatma Gandhi” he was lawyer, freedom fighter, social activist and prolific writer on the contemporary issues. He was born on 2nd October 1869 at Porbandar in Gujrat.

Most likely I have heard name of Gandhi in my childhood, this is my home district, where Gandhi had started his Champaran experiment in 1917.  My grandfather used to share Gandhi’s story, about his visit to our nearby village, he was fond of his bodily work and commitment towards cleanliness, the truth and respect for others.  Once I started going to school, I learn more about Gandhi and his idea.

I learned one word “Gandhian” people who claims to knows about Gandhi and keeper of ideas of Gandhi, now I can think about those Gandhian, most of the Gandhian came from same caste group, almost everywhere in the India, whether you go to north to south or east to west. Those caste group got prestige /positions. And i have observed, most of the Gandhi’s or scholars either they are silent or switched over to other side of politics, with whom they always opposed Gandhi's basic ideas.

In the new Indian, they are hardly visible for speaking or standing for justice of the last person of society, that was mantra of Gandhi. I don’t have any idea, if today he would come to the New India, what will be his strategy for political or social actions? Because we have numerous problems in and around our county, which required serious/ immediate actions for realizing justice and dignity for all. I will share Ten of my concerns with Mahatma Gandhi, which he might interested to work on.

Last but not the least Bapu, I will share my encounters with many so called Gandhian, who claimed to be propagators or implementer of your constructive work in India. I have traveled to many organizations (NGOs) they are working in the field of constructive work.  Some of the initiative are still relevant, and they are honestly trying to work with community. But, sorry Bapu, most of them are just using your name for getting money, and even they are not following the basics like equality, in the most of the organization, the hired staff from the same caste and the same organization has been claiming to work on the social Justice. But, here is the hope with new generation, many youths are trying to engaged with community for social justice for the most disadvantaged.