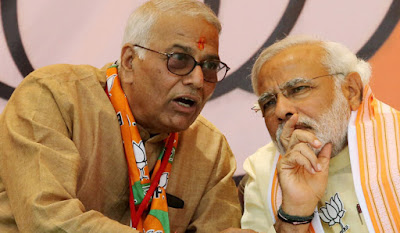 In the Democratic society, anyone and everyone has right to express his/her opinion like recently Yashwant Sinha, floated the idea of third front in Bihar for the upcoming Assembly election. But, whatever I can understand the politics or election in the new India, these are not the normal times, where one can keep experimenting, instead working with the available options. In the current scenario, multi corners election will give not only advantage but comfortable win to form government to existing power formulation. I am afraid, they may also form their government in any case with help of best practices in the past, what one would proud in the Corporate or otherwise? Standard operating procedures (SOPs). we have living example of Goa, Manipur, Karnataka and recently in MP with support of Raja Babu. Of course, all actions being performed under the constitutional provisions.

They missed the bus of the government under the SOP, in Maharashtra because of Shiv Sena being old fashioned party, they don’t compromise & able intact their legislative members, subsequently there was government formation of “Maha Vikas Aghadi”.

And, in the home state of Sinha sb, Jharkhand, there were a lot propaganda being spread against the Jharkhand Mukti Morcha and there are no leadership for CM post. But along with strong alliance under the leadership of the Hemant Soren, the JMM, Congress and RJD formed the government.  Rest is the history, how they are giving best governance at the time of COVID19.

So, now the ball is in the court of the political parties, they have clear formula to give strong fight for win, like they  did in the Jharkhand or go back to pavilion with without match (hit wicket)