Lalu Prasad Yadav: One of the great leader from the margin and for the margins 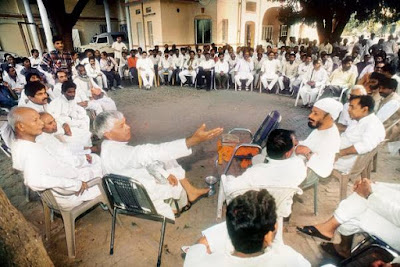 Lalu Prasad Yadav, is one of the greater examples for success of our democracy, his entire politics was based on to give voice to unheard through the political representation and ensuring social justice. He was staunch supporter of JP, Lalu Prasad was leading figure for the the anti-establishment movement in the Bihar, that was against the caste system, against the then dominant power of congress party, or reaching unreached people of the society through the social justice agenda of the nation.

In 1990, Lalu Prasad Yadav became the Chief Minister of Bihar and this was a big shift in the politics of Bihar. Lalu Yadav tried to implement the idea of social justice for the marginalized sections of society, which is promised in our constitution and he also ensured the participation of the weaker sections of society in the democratic process/ representation.  He is one of the leaders in India who never collaborated with communal forces. Like Dr. B. R Ambedkar rightly said “Political democracy cannot last unless there lies at the base of it social democracy. What does social democracy mean? It means a way of life which recognizes liberty, equality and fraternity as the principles of life” During the Lalu Prasad Yadav’s regime, the media were very hostile towards him and his ideas of social democracy, because in this process people were being given voice and share of power at the village level, which is the basic need for any democratic society to reach out to the unreached people, community, caste or religion.

But, the way Lalu was targeted for the wrong reasons, it did seem that the media was biased. The BJP also joined hands with one of the leaders from the greater Janta Privar to destabilize this new political formation or I would say to established their political agenda in Bihar.

Nitish Kumar became Chief Minister in 2005 in the name of good governance and development. This was unfortunate for Bihar – during this period Nitish linked with the media to highlight what he will be doing for Bihar. But, everybody already knows the status of education and health in Bihar. There are no teachers in Bihar’s colleges. Not even the examinations are held on time.

Currently, Lalu Yadav is in the Ranchi jail, where he was convicted under the fodder scam cases in 2018, there were several reports, in which claims by his party and family, Lalu Yadav being frame under the conspiracy. He is not keeping well for some times, but authorities are not giving enough support, as we have been facing pandemic, he should have released from the jail immediately.