Muslim in India at the time of COVID19 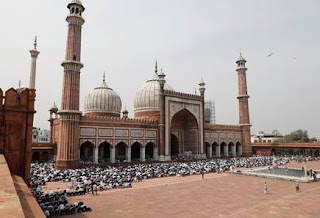 India is under complete lock down since 24th of March. Initially the lock down was planned for three weeks but it now got extended until the 3rd of May.All public transport got stopped and we are only allowed to go outside for things which are absolutely necessary as getting food for example. The state borders are closed; the government is telling us to stay inside our homes.

Not everyone is privileged enough to stay at home and do home office. As anyone else in the world, In India, people from marginalised groups are the most effected by this lock down. For example, the migrant workers or the people who earn their livelihood on a daily basis. They are starving because they can't earn any money at the moment. The government is trying to provide food to those people but it's far from requirement. In many parts of the country, it is the civil society which is putting a lot of effort and resources into help for those people, wherever it is required.

Minority populations are suffering on the two fronts in India, one with the Coronavirus and second by the Islamophobia. The media is stigmatizing the Muslims for spreading the virus, after there were cases of Corona virus linked to the members of one sect of Muslim. After this, the entire community was being targeted by hate campaigns, which happened on social media. Now people started boycotting the Muslim in their localities.

This hatred is not new in India. The far-right groups, associates of The Hindu nationalist party Bhartiya Janta Party (BJP), They has been in power for last 6 years at national level, they have been pushing their agenda aggressively, which is based on Majoritarian idea of government. The vigilante groups targeted Muslims on there has been active for quite some time, targeting Muslims based on their identity. In March 2019, Michelle Bachelet Jeria, said in her annual report to the U.N. Human Rights Council in Geneva. “We are receiving reports that indicate increasing harssment and targeting of minorities – in particular Muslims and people from historically disadvantaged and marginalised groups, such as Dalits and Adivasis,”

As per official figure of the 2011 census of the India, Muslims are constituting 14.2 % of the country population, which will come around 172 million people. But, there social indicators are low amongst the muslins community, like only 15% of Muslims have received higher education.

In India Muslims are mostly engaged with the informal sectors or particularly depends on the self-employed. Many incidents are coming in to the media, where people are asking name of mobile street vendors, who sells vegetables or fruits.  If they found Muslims venders, people are asking to leave those locality, in many cases vendors being physically harassed by the people. In some case, Muslims vendors had started mentioning Hindu name to sell their goods. So, they can sustain their livelihood. But, then people are asking Identity card from those vendors, which is certainly against the law of the nation. In some places, vendors have complained against these kind of harassment. but ultimately marginalized groups are being pushed towards more vulnerable situation.

People from Muslims community are also engaged with meat business at the different levels, mostly they who do cutting of animals, many people were doing small business of selling of meats, once the cases of coronavirus detected in India, there were fake news circulated through social media, to stop eating meat, because one can get virus through the meat. People stopped buying meat. At the results, livelihood of the Muslims being stopped, before our country went in to the complete lock down. The entire value chain being effected by this, silent boycott of Muslim. Afterwards, in the many places, government given advertisement in the media, about there is nothing wrong to eat meat.

The discrimination or hatred did not stop here, people of the Muslims community have been facing discrimination in hospitals, after the COVID19 case broke out in India. Irfan Khan, an agricultural labourer from Sikri, Rajashtan, one of the north Indian state, when the government run women District Hospital in Bharatpur refuse to attend and referred his pregnant wife Parveen to another hospital. They family were asked to go to Jaipur, for this, they will have to travel 180 KM to get medial help in Jaipur. Their baby girl, born on the way, and the baby did not survive due to the cruel and hostile behavior against the Muslim. After the reports in the media, the local authorities have ordered a probe.

Many reports are also coming from different part of Indian as well regarding discrimination with the Muslims, for getting regular health services. One shocking incidents were in the local Odia news paper reported on 12th April, in the eastern Indian state, Odisha, where Dr. Sayed Abul Hasan died because, his hospital denied his dialysis, that was scheduled for the 10th April. They went in to other hospitals for the dialysis, but all of them denied, In the same day in the evening around the 9pm Dr Hasan took his last breath. He had served as a Medical officer at Kendrapara government Hospital in Odisha.

There was story in media, In Ahmedabad, Gujarat, the Civil Hospital reportedly segregated COVID-19 patients on the basis of religion apparently after some patients expressed discomfiture. The State Health Department, however, denied the charge.

Practicing prejudices and discrimination by state and any citizen have been prohibited by provisions of the Indian Constitution, under the article of 15 and 17 respectively.

Dr. Bhimrao Ramji Ambedkar, one of the great thinker in the modern India and the chairperson of the drafting committee of the constitution rightly said, “Democracy is not merely a form of Government. It is primarily a mode of associated living, of conjoint communicated experience. It is essentially an attitude of respect and reverence towards our fellow citizen”