Babasaheb Ambedkar: The Indefatigable Leader Of The Marginalised 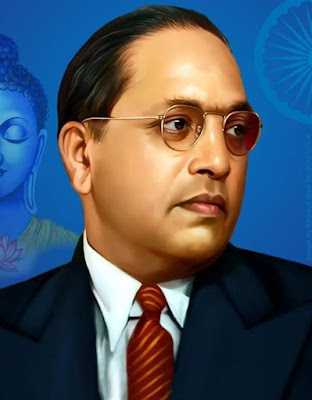 We are remembering one of the greatest leaders of modern India. Dr. Bhimrao Ramji Ambedkar popularly known as Babasaheb Ambedkar was a social reformer, public intellectual and one of the finest minds of the 20th century. He was born on April 14, 1891.
The Dalit moment which Ambedkar’s life and struggle did so much to shape, was not limited to the state of Maharashtra only. In fact, under his leadership, Dalit movement suffused all over the country in the pre-independence period which later turned into a much larger movement within the framework of the Indian Constitution. He was also an ardent supporter of women and labor rights.
He was independent India’s first law and justice minister, the architect of the Indian Constitution, and founding father of the Republic of India. In India and elsewhere, he was often called Babasaheb, meaning “respected father” in Marathi and Hindi. If Gandhi was Bapu, the father of the nation, Ambedkar was ‘Baba’ to his people and a great proponent of the principles of liberty, equality, and fraternity.
Babasaheb who is also known as the father of the Indian Constitution, while chairing the draft committee in the constituent assembly ensured that certain specific rights and privileges are reserved for the disadvantaged and marginalized sections of the country. The people from these sections have suffered an inhuman form of caste-based discrimination for thousands of years. Ironically, even after more than 70 years of Independence, the plight of the majority of people from these sections of Indian society continues to remain the same.
He earned doctorates in economics from both Columbia University and the London School of Economics, and also gained a reputation as a scholar for his research in law, economics, and political science. In his early career, he was an economist, professor, and lawyer, while his later life was marked by his political activities. He became actively involved in campaigning and negotiations for India’s independence, publishing journals, advocating political rights and social freedom for Dalits, and contributing significantly to the establishment of the state of India. In 1956, he converted to Buddhism and initiated a mass conversions of Dalits.
The first time that I met people, who have been following Ambedkar’s model for claiming Dalit rights through mobilization of the community was in 2004, where our mentor and friend Bharat Bhati was trying to fight with the local feudal lord against the atrocities that they were meting out on Dalits. I observed, how this group of people was trying to implement the most important formula of the Dr. Ambedkar “Educate, Agitate, Organize”, and thereby mobilizing common people to access their rights guaranteed by our Constitution.

My second, encounter with such activities was in Eastern Uttar Pradesh, where I travel frequently to implement project linked with the Dalit community to mobilize and empower the Dalit women so that they can efficiently avail their Rights and Entitlements, which has been ensured by various legislations and social welfare schemes. During my interaction with the women of these communities, I observed that there is a  strong sense of political understanding and awareness among the Dalit men and women about the political messages of  Dr. Ambedkar. Out of curiosity, I tried to understand, why they had such a strong understanding of the importance of political empowerment, even though there was a glaring lack of education among these people.
Along with my field visit for work in the region from 2012 to 2015, I always tried to understand, my question, why the Dalit community is politically active or assertive? So, I found the answer to my question; these are places, where Kanshi Ram had traveled extensively and he mobilized the Dalit community, I recall my several conversations with the activists of the Ambedkar Nagar, Faizabad, Mau, Azamgarh, Basti and Gazipur districts in the eastern UP. These activists shared with me that they closely worked with Kanshi Ram during his visits in the region. They also told me that Kanshi Ram had a strong personal connection with people and was able to mobilize them to create a sense of togetherness among the Dalits that aligned with the larger political framework of Dr.Ambedkar.Kanshi Ram had successfully built the base in the UP for a political transition. People from the marginalized sections now easily connect themselves with the struggles of Dr. Ambedkar, which he had faced during his lifetime. And, Dalit community considers the constitution a gift by him, which infused them with a renewed sense of dignity. Babasaheb is considered as a symbol of assertive politics at the village level, which was evident during my interaction with the community.

Conclusion: Dr. Ambedkar is still relevant to the realization of social justice in India for the most disadvantaged groups. In the present context of the polarized political environment, the political teachings of Dr. Ambedkar hold more relevance than ever. During the constituent assembly debate, he had suggested economic justice for all. However, Dr. Ambedkar did not receive support for his proposal on constitutional socialism by the constituent assembly.
He had observed in the mid-1940s: “Unfortunately, for the minorities in India, Indian nationalism has developed a new doctrine which may be called the Divine Right of the Majority to rule the minorities to the wishes of the majority. Any claim for the sharing of power by the minority is called communalism while the monopolizing of the whole power by the majority is called nationalism“.  This statement summarises the present political and social atmosphere in the country in a very effective and appropriate manner.