‘What Happened In Jamia Still Worries Me’ 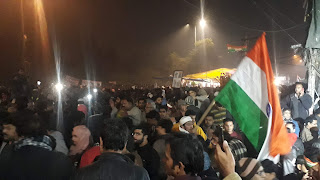 On the 17th December around 10pm, I landed at Terminal-3 from my official trip, I  was relax and excited because this was my last business trip for the 2019, but at the same time I have been constantly worried and tense, because, what had happened on 15thDecember evening in the Jamia Millia Islamia, This is the my Alma mater and for the last 10 years, I have living in the Jamia Neighborhood.

On 15th December night was difficult for me to sleep in Bhubnwshar, because my family members was in the Delhi around the Jamia Neighborhood, and whatever I had been getting news from my family, friends and from the social media, those were equally disturbing,  for the crack down the students protest against the Citizenship Amendment Act, the way police brutally threshed the students, there were no distinction to the girls or boys students of Jamia. They were treated like criminals, even students, who were never participated in the any kinds of agitation, and they were calmly reading the library , they were also brutally beaten by the Delhi police. The police not stopped here, students were taken to the various police stations and denied medical assistance for long until social activist intervened.


Thanks for the spontaneous mobilization of the concerns citizen, they went to the Delhi police head quarter for protest against the brutal actions of Delhi police and to release all students, to whom Delhi police had detained in the police station.

I have to face difficulties for getting cab from airport to my place near Jamia Millia Islamia. At terminal 3, ola taxi stand, when I enter in the premises, one cab driver came to me and inquired, about where I am going? He gently refused to go, he said sir, protests have been happening to those area, it will be difficult for me to go, people of those area are very angry, and so on…… I tried to engaged with him, since I have been closely working with social sectors, I said, brother, you must understand, who is making fool to all of us, in his case I tried to explain, how he has been exploited by the new app based business owners, no one listing is him/ cab drivers. There are no union for that matter to fight for justice of labor rights. Subsequently, he realized that and passed smile to me.

Finally, I got my cab, driver his name was Raman Lal (Name changed), he dropped me at my place around, he had also a lot of misconceptions about the Muslim, we talk all the time during the travel, he has four kids and wife staying back in Western UP. He is staying alone somewhere in the outskirt of the National Capital Region(NCR). He too was very irritated with the app based business and there are no ways to get justice for this labor. At the time every one has been so busy to make ease of doing business for the big owners, but no one listing to the margin