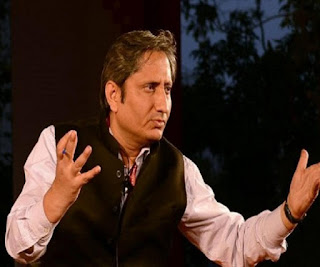 Ravish Kumar got Ramon Magsaysay Award in the category of Journalism, Literature, and the Creative Communication Arts, before him on of India’s most respected voice in the Journalism Mr. Palagummi Sainath, had received same prize in 2007 for doing extraordinary reporting on the poverty and rural life, the citation said Sainath was being recognized for his “passionate commitment as a journalist to restore the rural poor to India's national consciousness".

The Ramon Magsaysay Award, Asia's equivalent of the Nobel Prize, the citation for Ravish Kumar explained his work "harnessing journalism to give voice to the voiceless" and his "unfaltering commitment to a professional, ethical journalism of the highest standards”. Ravish begins his work in with NDTV-India in 1996, as per report he was initially engaged in the low profile work, with his dedication and consistency towards the passion for true reporting, he has achieved independent     promotion in the NDTV, where he can produce good reports based on his creativities and imagination. He has created his own space for putting story in the Television media, in spite of the all difficulties, Ravish stablished credible option for the Hindi medium journalism.

Ravish Kumar, experimented with new format in the history of Indian TV medium, that was called “Ravish ki report”. In which he breaks the norms of studio room of TV, instead he went to field for exploring the issues and speaking to people, on which common people have been suffering. His courage to bring news and investigate the matters is unbelievable. Specially, in the age where everyone has been doing fine in his or her life by imposing self-censorship.
He has been facing many difficulties for doing his simple job of Journalism, by trolled army and hate followers. Even, leaders of the BJP boycotted his program for discussion. These kinds of situation also not discouraged him, he discovered new ways to give new on the TV screen. He raised pertinent issues of the common people on the national Television. He started one of the unique series on the history of TV channel, like Job series, Railways series, University series etc. That’s helps people to get justice in the democracy, In the Job series, many students have cleared the competitive exams but due callousness of government policies, nothing has happened in the months or years in the many cases. After his program, those youths raised their voice on the TV channels, after that most of the youth got respond from the respective departments. In the similar situation, In India nobody bothers about the timings of the running trains, he raised this in the series of reporting, after that one can see the change in those regions.

Ravish’s understandings of the caste, Gender and communalism are different from the main streamed Hindi journalist. Because, He has been able to under recognize Indian constitution and the provisions being made for the ensuring justice for the marginalized sections of the society.  He has been staunch supporter of for inclusion or inclusive policies based on gender, caste or religion. Once, he said, the way we have been force to be communized our society through different kind of nationalism, which will harm the majority community in the longer run.

Largely situation of free is grim. In South Asia, freedom of the press is under the attack, In the 2019 World Press Freedom Index, India is ranked 140th places out of 180 countries in the world rankings. Our neighboring country doesn’t set a good example either, Bangladesh is ranked at 150th place. We came across a piece of news last year about the arrest of 63-year-old senior photojournalist Shahidul Alam for reporting the students’ protest. He was released from prison after more than 100 days. In Bangladesh, many bloggers are being killed or intimidated for writing on religious issues.
People are becoming hostile towards different views or arguments, instead of engaging with counter-arguments, rational people are being killed for speaking or writing the truth. As per report The Committee to Protect Journalists, 50 journalists have been killed in Indian since 1992. In many cased motives has been confirmed. However, in many cases, journalists have been killed for speaking or reporting against wrongdoing or uncovering a scandal, but the culprits have not been brought to book yet.

The situation is, even more, perturbing for regional reporters residing outside the metropolitan world of India. This is really scary for those, who work in those circumstances without any security. During my field visit to remote locations of India, I had chances to interact with press reporters at the district or block level. There were very low paid and their income is based on the number of incidents that they manage to report.

In these adverse circumstances Ravish created new ways for taking stand for giving voice to the pressing issues of the country. Actually, this is the job, supposed to be done by all media personal, since most of Journalist chose to easy or short cuts, so certainly Ravish, you are special among all. Hope, young journalists will learn from the path you have chosen by doing honest and consistent work. which is necessary for robust democracy.