D Raja and the larger left politics of India 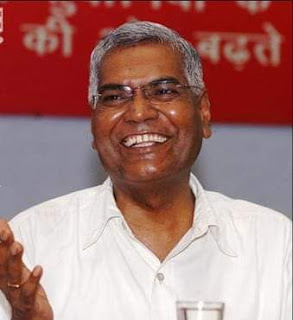 Communist Party of India (CPI) makes history by elevation D Raja to the post of general Secretary of the party. Mr. Raja will be first General Secretary, who is coming from the dalit community,
He is the one of finest leader and political activists of our time. I always admired his style of work like soft spoken with appropriate facts and interpretation, never hesitate to register his disagreements, if he is not convinced. I don't know, how will he appropriate in 2019 political demands for ensuring mobilization of mass for justice for all in our democratic framework, at the even existing left political parties are not coming together.Since 2004, i have been observing Mr Raja actions, he always engaged with all kinds of the peoples moment, which affects life of the marginalize section, he is only leader from his party, who has been negotiating dalit and the left.

This is high time for the communist parties of India to understand the caste, religion, tribes, gender and region differently, work with their aspirations to build their confident on the party.There is a need to take radical steps to reform the party and build a new leadership at he grassroots level too. For a long time now, this party has lacked strong ideas that could inspire the worker. Left, will have explore, new slogans and narrative to excite the masses, issue and difficulties of the people are same but you should not use the same slogans. Currently, we have crisis in the every spheres of life, begins from the rural distress, agrarian crisis, market slow down, high inflation, no jobs, even people are losing jobs.

The Party leaders will have to come up with a strong narrative to counter their main opponent, the BJP.The CPI will have to build cadres, and they should give fair representation based on caste, gender, religion, region etc. All Communists Parties of India should joins hand for electoral battle, they could build some kind of federation on the left parties. They can still exist with their own identity but they can elect one convenor of the larger left to build the confidence of the people. I am sure, D. Raja has credibility and authenticity for leading such federation of united left. Here CPIM will have to give driving kick for the left alliance.