Rahul Gandhi And The Future Of Congress Party 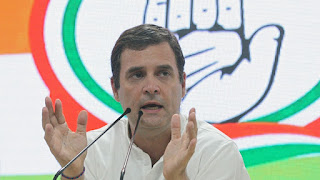 Rahul Gandhi has decided to resign from his post as Congress president. This was unexpected in contemporary India’s current standard of political ethics. Certainly his party requires major restructuring to stay relevant. For the last 10 years, the Congress party has failed to build a strong narrative to counter the ruling BJP. BJP and its parent organisation RSS, has a very clear agenda, with a consistency to roll-out their vision of majoritarian nationalism.

Even if Rahul Gandhi tried to follow soft Hindutva to counter them, why would someone pick soft instead of the original Hindutva? We need Congress, but not a dented one. For quite some time Rahul has been trying to change the outlook of the party. There are many evidences that prove that Rahul had tried to revive some of the outfits of the Congress party like the Youth Congress, Mahila Congress and NSUI.

In 2019 assembly elections, Congress failed to build a narrative to attract new audience and Gandhi failed to consolidate his own constituency. If they would have installed leaders like Sachin Pilot and Jyotiraditya Scindia as chief ministers, the picture would have been different today. Congress president should realize, India is changing very fast, and young people particularly, will not be able to digest the political understanding that INC has been carrying for a long time. There’s nothing wrong with that politics, but in the current electoral politics, one would have to come up with sharp ideas or agendas – that can be connected with the masses. In a country like India, it is difficult but necessary to set an electoral agenda.

Congress should strengthen their local party workers on the ground to better connect with people. They should take a lesson or two from the ruling party’s allied organization which has been operating on the grounds for the last fifty years, and has successfully mobilized the people. Their work on ground has build a solid base support or cadre for BJP.

Congress party also missed the opportunity of forming an alliance with the Nationalist Congress Party (NCP) in Maharashtra, YRS Congress in Andhra Pradesh and TMC in Bengal. Even though, they were able to make alliance with NCP in Maharashtra, they failed to recognize the other smaller parties in Maharashtra and elsewhere in the country. INC should have recognised the need to accommodate other parties for the larger goal. BJP on the other hand, went on to share seats with JDU in Bihar and Shiv Sena in Maharashtra.

Congress should also evaluate whether the senior party leaders are able to influence their respective communities or does the party need to make way for younger people from those communities. These young leaders will not only be a credible voice for the party, they will also be the true representative of their community.

Continuing or discontinuing as party president is Mr Gandhi’s choice, but taking the party forward, too, is his and his team’s responsibility. It’s high time Congress restructured their system and their so-called powerful courtier, the Congress Working Group (CWG). One solution could be selecting multiple vice-presidents to work closely with the  party president. Another way to go forward can be Rahul continuing as president for a year or two, and then the party can select a new president. Another option would be that the party selects a president immediately who can work under Rahul and his team for a limited period of time to understand the ongoing procedures and policies. Many sympathizers are demanding Priyanka Gandhi to be made the president, but this will be another disaster for the party and the country.