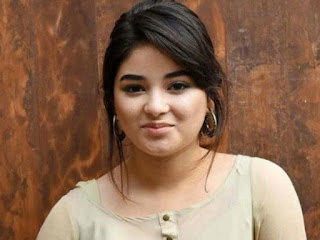 National Award winner-winning actor Zaira Wasim announced her “disassociation” from the field of acting, stating she was not happy with the line of work as it interfered with her faith and religion, she captured down details on her Facebook page about the quitting the film industry.
The 18-year-old actor said as she completed five years in the profession, she wanted to "confess that I am not truly happy with this identity i.e my line of work". "For a very long time now it has felt like I have struggled to become someone else. As I had just started to explore and make sense of the things to which I dedicated my time, efforts and emotions and tried to grab hold of a new lifestyle, it was only for me to realize that though I may fit here perfectly, I do not belong here."
This is really difficult to make judgment about her decision; we don’t know what made her to take this tough decision, moreover, the reasons she has given also more disturbing for our society, particularly for girls/ women of the Muslim community. Nothing wrong to quite the work, which one has opted in the begin of her or his life. She achieved huge success through her talent in the film industry, this is the one of most secular platforms, where one can achieve based on abilities, even though this place is also highly competitive and full of nepotism for different kinds.
The growth story of any society of the world are same as ours. One has to pass through different kind of transitions to achieve, if one would like to understand by the example of the western society and clash with their religion. Largely, people who believe in the God or Religion, find out ways to lead life without any fuss and there is no conflict with any profession one embrace and they pursue their religion. We have sufficient number of example in our country or in the globe, people doing all kind of profession along with the believe in the God. Even, one can see Muslims women doing all kinds of Job.
Our society are largely patriarchal, one of the main causes is the Religious biased against women. People of India fought against those norms and practices, which are against women, we have achieved many things for breaking the patriarchal system but annihilation of patriarchy still our goal to attain.
I am more worried about the girls, who want archive her dream, what Zaira has done, she persuaded her talent. But, the way she announced her exit would be counter effect for Muslims girls, they are already in so much pressure, due to present social and religious norm, which is nothing to do with the Islam or her practices of the same religion. for what to choose or how to build their carrier? The Bigots of the society will have living example to showdown to girls, not to go for this profession or that work.
In the current global atmosphere, where Islamophobia is in the pick, we have a massive load of information floating around us, people are accepting biased and morphed sources, thus creating more hatred and misconceptions. In this situation, how will lay people take the massage of Zaira? And which will create different perception about her fellow believers. There is nothing new for moving from one profession, but certainly she could have done differently.